The Office of Mayor

The ancient office of Mayor dates back to the days when Mayors had much wider authority than they do today. The position is now a Civic role with the exception of chairing Council meetings.

The importance of the position however continues to be widely recognised and remains the highest office that the citizens of the town, through their elected representatives, can confer.

The role of Town Mayor is distinct from that of Councillor and the Mayor carries out the role in a non political manner. Each Mayor will adopt their own personal approach, establishing their priorities and interests.

The Town Mayor, or in his or her absence the Deputy Mayor, has the following roles or functions:

The Town Mayor is elected by full Council at the Annual Meeting held in May, and serves for one year.

The Annual Meeting takes place in the Council Chamber at 15 Station Road, Stone, and the ceremony follows a set format with the Mayor’s appointment being the first item of business on the agenda.

During the appointment, the new Town Mayor will receive the Chain of Office from the Retiring Town Mayor and sign a declaration of Acceptance of Office. The new Mayor will announce the name of the person who will act as Consort and bestow on them their badge of Office.

The Town Mayor will announce the name of the person who will act as Town Mayor’s Chaplain and will address the Council.

The Deputy Mayor will invite their Consort to receive the Deputy Town Mayor’s Consorts’ Medallion.

The Mayoral Chain is a valuable historic item. It is usually worn by the Mayor for civic engagements within the town of Stone.

The shield surmounted by an applied white enamelled crest of a winged horse rising from a
crest coronet and grasping a black lozenge in its front hooves and is apparently taken from the Arms of Earl St Vincent, one of Stone’s famous personalities; the central shield above an applied black and white enamelled banner proclaiming the Latin motto ‘SIT SAXUM F1RMUM’
(translating to ‘Let the stone be firm).

For engagements outside of Stone, the badge and ribbon must be worn, unless prior permission has been granted by the Borough or District Council within which the event will take place. 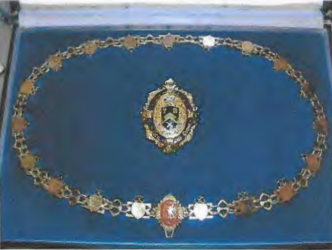 Invite the Mayor to an Event